All the rumours were true, the organisation at Paris 7 is pretty poor.  I had an inkling of this before I arrived, when I was told ‘we don’t know when our first semester start date is’ in June (eg less than 3 months prior).  Then there was the time that they sent me an English comprehension test instead of a French one.  But signing up for a timetable does not need to be as complicated as it is here.  I had to find the course descriptions either online (much easier said than done) or by finding the office and looking on a pin board nearby.  I had to do this with four different departments, in different buildings at different ends of the campus.  Once I had a provisional timetable, I then had to go back round all four and sign up for classes in the office.  Some you just turned up and waited in a queue, others had a designated time you could sign up.  The class descriptions, times and codes weren’t all available at the same time and it was really just by sheer luck that I didn’t have any timetable clashes.
The university works a semester at a time, so everything I did in September to sort out a timetable I need to do again in January.  I’m already thinking about what celebratory cake I’ll be having at the end of it!

There seems to be a lack of communication between and within departments in regard to timetabling of rooms and classes, and of course exams.
Teachers may or may not reply to emails: luckily most of mine generally do if you send a follow up a few days later, but there are a couple who just ignore them entirely.
A couple of weeks ago our Linguistique Contrastive teacher wasn’t there.  She’s normally five minutes late for class, and had been half an hour late once, so most of the class waited for a good half hour, expecting her to walk in the door any minute.  She didn’t, and eventually it transpired that she wasn’t coming and someone had forgotten to put up a note on the door telling us that.  In Edinburgh I used to find it so irritating getting an email five minutes before a class saying the lecturer wasn’t coming, but it’s a lot more useful than potentially waiting for an hour…

This semester I’ve taken seven classes at Paris 7, which are worth 26 ECTS.  This is the equivalent of 52 credits at Edinburgh Uni where you need to do 60 each semester.  Here the French students need to take 30 ECTS per semester, but as an Erasmus student I need 15 for French and 10 for Linguistics per semester. 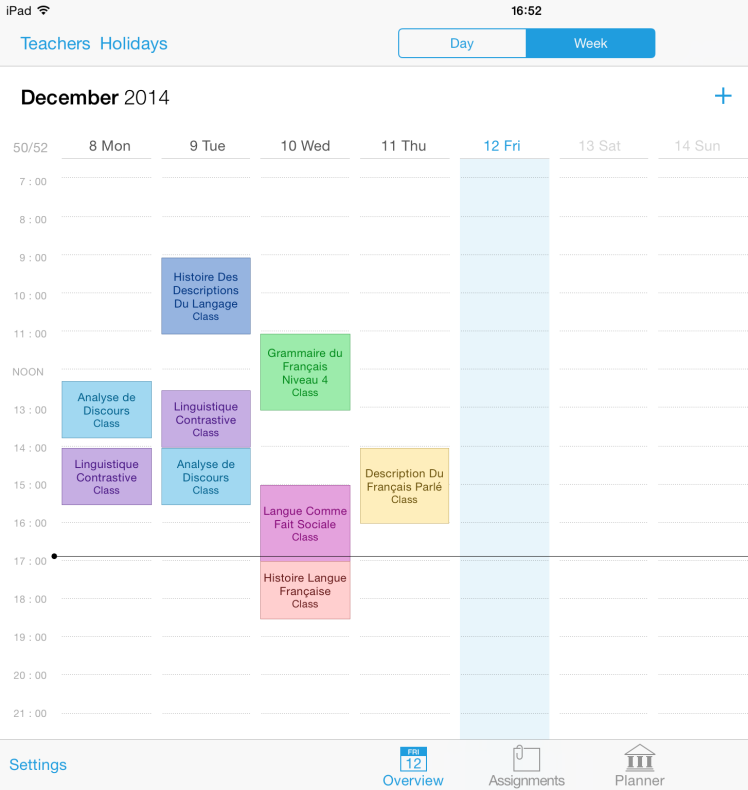 How many of those seven classes use a slideshow?  Two.
I miss powerpoints.  I find it really difficult to keep engaged in classes, and find when I do zone out it takes me ages to work out what’s going on because there are no visual aids to refer to.  Most of my classes are just 90/120 minute monologues with no break and for the first couple of weeks I was exhausted at the end of the day.  I’ve got more used to it now, but it’s definitely a challenge to concentrate in French for that long.
The learning style of the students is also more autonomous.  In most lectures, the students are typing word for word what the teacher/lecturer is saying.  This seems to be encouraged, as some teachers slowly repeat sentences for you to write down, and as my friend Katherine learned they seem to quite like it when you quote them in your exams!

The relationship between staff and students here means that I definitely feel ‘teacher’ is the most appropriate term to use.  Generally class discussion isn’t really encouraged, it’s more of a question/answer format if there’s any participation.
With the exception of one teacher whose class I dropped, all of my teachers have been sympathetic towards Erasmus students.  One of our teachers in particular would make a point of giving terms in French and English, very helpful!  A couple of weeks ago I had to do a transcription for one of my classes (where I’m the only international student) and when I told the teacher that I was finding it difficult to transcribe this very quick, very colloquial French conversation, he was understanding and actually apologised for not thinking about how much more time and effort it would take for me in comparison to the other students!

On the whole, I’ve found exams to be a lot more relaxed.  As a non-native French speaker I’ve been allowed to take a bilingual dictionary into all my exams, with none of this handing it in before to check there are no hidden course notes in it.  All my exams have just been in a classroom, with no invigilator, just the normal class teacher.  One of my teachers actually allowed us to use our course notes in the exam, including the reading she puts up online.  Another teacher showed up 15 minutes late to the exam, then started cutting out the essay questions to distribute, and announced that even though we started late he needed to leave at 11 regardless.
Everything is graded out of 20, which means that often when there are marks assigned to each question (which isn’t always the case) it’ll just be 2 or 3, which isn’t really indicative of how detailed a response to give as obviously you can’t just make 20 points in a 2 hour exam!  I’ve also never seen bonus questions before, but a couple of teachers put them in their exams, making it technically possible to get 24/20!

The library is open 11h-20h on a Monday, then from 9h the rest of the week, except Saturday when it’s 11h-19h and Sunday when it’s closed entirely.  You also can’t take books out without paying for the privilege of doing so, and the computers are definitely older than me.  Also, the wifi is a bit iffy in the library and more often than not it doesn’t work.
There’s no student union, or student union type building, which I think they really need.  If I have a gap in between classes I always end up in the library or going for a coffee as there’s nowhere else to go, and it would be nice to sit in the warmth in a friendly atmosphere without having to pay four euros to do so!

I have a new found gratitude and appreciation for the efficiency and organisation of the University of Edinburgh, and Teviot, and our library, and all other things that are wonderful about Edinburgh!  But it’s not all bad studying in Paris, because there’s always a visit to the patisserie at the end of a long day…